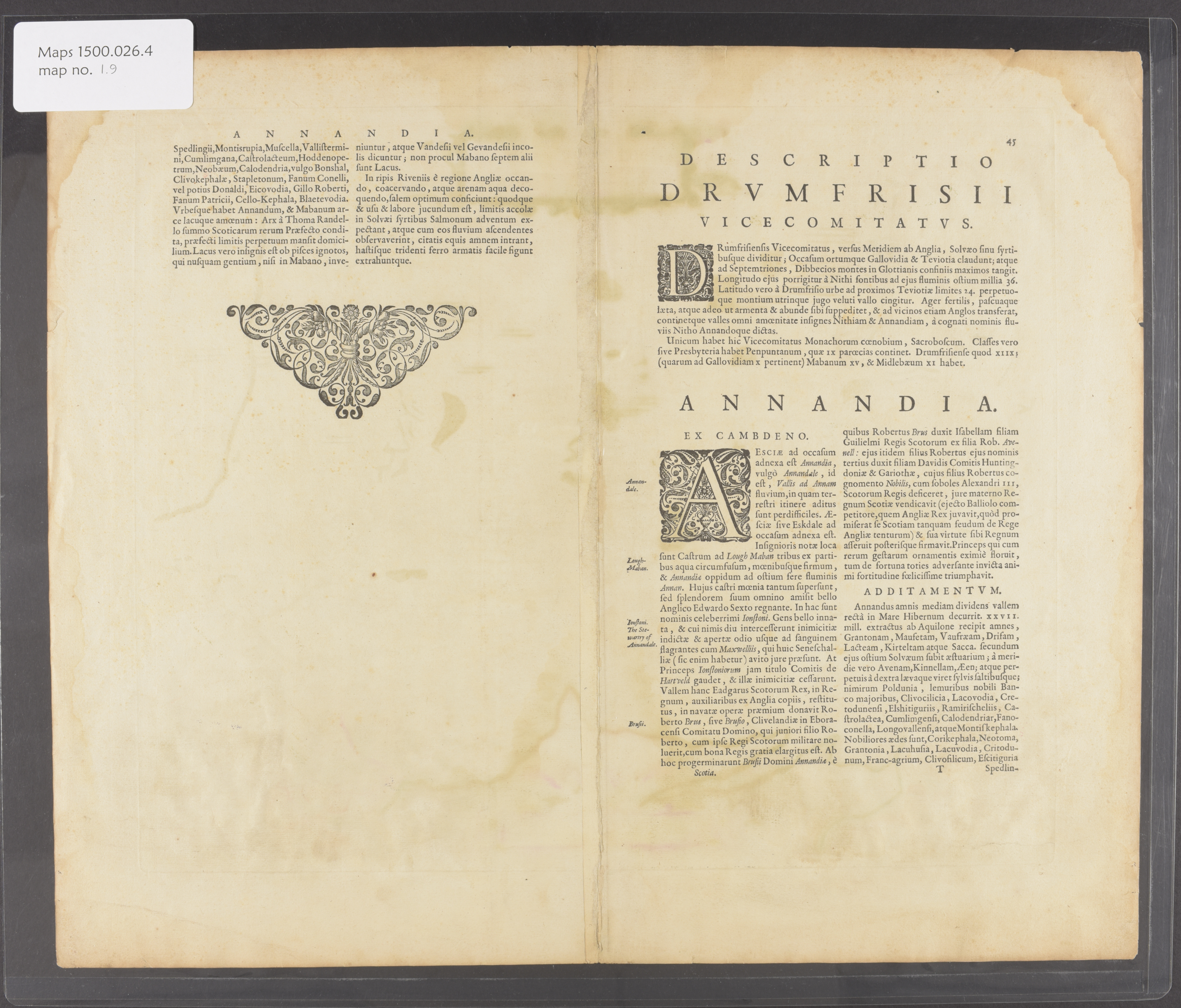 DESCRIPTION OF THE Sheriffdom OF DUMFRIES

The Sheriffdom of Dumfries is towards the south separated from England by the Solway Firth and sandbanks; on the west and east Galloway and Teviotdale enclose it; and to the north it touches the very high Dibbecian mountains on the Clyde borders. Its length stretches from the source of the Nith to that river’s mouth for 36 miles, its breadth from the city of Dumfries to the closest borders of Teviotdale for 24, and it is girt on both sides by a continuous mountain ridge as if by a rampart. The land is fertile and the pastures rich, to such an extent that it both abundantly nourishes herds for itself and also exports them to the neighbouring English. It contains the valleys, noted for every beauty, of Nithsdale and Annandale, named from the rivers of cognate name Nith and Annan.

This Sheriffdom has one monastery, Holywood. It has the divisions or Presbyteries of Penpont which contains nine parishes, Dumfries with 19[? XIIX] (of which 10 belong to Galloway), Lochmaben with 15, and Middlebie with 11.

To Aescia on the west is joined Annandia, in the vernacular Annandale, that is Valley on the River Annan, to which access by foot is very difficult. It is joined to Aescia or Eskdale on the west. Places of more significant interest are the castle at Lochmaben, surrounded on three sides by water and defended by walls, and the town of Annan almost at the mouth of the River Annan. Only the walls of this castle survive, but it completely lost its splendour in the war with England in the reign of Edward VI. Here live the Johnstones, of most famous name. A family born to war, and to which there occurred for too long declared and open enmity, burning with hatred to the point of bloodshed, with the Maxwells, who rule this Stewartry (for so it is called) by ancestral right. But the chief of the Johnstons now enjoys the title of Earl of Hartfell, and those enmities have ceased. This valley was given by Edgar King of Scots, when he was restored to his kingdom with the assistance of forces from England, as a reward for service rendered to Robert Bruce, lord of Cleveland in the county of York, who with the good grace of the King bestowed it on his younger son Robert, since he himself did not wish to perform military service for the King of Scots. From him descended the Bruces lords of Annandale; one of them, Robert Bruce, married Isabel daughter of William King of Scots by the daughter of Robert Avenell; in turn his son Robert, third of that name, married the daughter of David Earl of Huntingdon and Garioch; and his son Robert, nicknamed the Noble, when the descent of Alexander III King of Scots failed, claimed the kingdom of Scotland by right of his mother (his competitor Balliol having been ejected, who was assisted by the King of England, because he had promised that he would hold Scotland as feu from the King of England) and by his virtue won the Kingdom for himself and secured it for his successors. A chief who both flourished outstandingly in the distinctions of action and triumphed most happily by his strength of mind which was undefeated by fortune so often adverse.

The River Annan divides the valley in two and flows straight into the Irish Sea in 27 miles. Coming from the north it takes in the streams Granton, Moffat, Wamphray, Dryfe, Milk, Kirtle and Sark. After its mouth it enters the Solway estuary; from the south Evan, Kinnel and Ae; and continuously on right and left it is green with woods and glades; certainly [all ?] Poldunia, with ghosts larger than noble Banco’s, Clivocilicia, Locharwoods, Cretodunensis, Elshyshields, Ramseycleuch[?], Castlemilk, Comlongon, Cummertrees[?], Kirkconnel, Longovallensi, and Cleughhead[?]. The more noble houses are [all ?] Landheads[?], Newton, Granton, Isle Tower, Locharwoods, Critodunum, Franc-agrium, Clivofilicum, Elshieshields.